The Crashing Rental Market Could Set Off The Next Housing Crisis

The Crashing Rental Market Could Set Off The Next Housing Crisis

We have extensively followed the collapse in rental prices since the beginning of the pandemic here on Zero Hedge (for examples, look here  and here and here). In addition to prices collapsing, some tenants affected by the lockdowns have simply decided they no longer want to pay rent and are stiffing their landlords with little consequences.

There’s not doubt that many renters – including many businesses – don’t have the means they once did to pay their rents.

And though we knew the fall in prices was likely to get worse before it got better, the Wall Street Journal is taking it one step further and now asking the question of whether or not the rental price plunge could actually set off the next housing crisis.

Another question also remains: how bad will the eviction scene be when the protections against eviction put into place by federal and local government expire? It is estimated that such moratoriums may wear off by January 2021, or even sooner. At that point, renters will need to pay up for the months they’ve missed.

The Federal Reserve Bank of Philadelphia released a study of unemployed workers last week that estimated outstanding rent debt could reach $7.2 billion before the end of 2020. Moody’s has estimated that it could reach an astounding $70 billion if there is no further stimulus.

Moody’s estimates that 12.8 million Americans would owe an average of $5,400 from missed rent payments.

Though the $70 billion pales in comparison to the $1.3 trillion that set off the subprime mortgage crisis, the 12.8 million Americans affected far surpasses the 3.8 million people who were foreclosed on during the housing crisis. At the same time, housing prices are actually rising as a wave of owners move from the city to the suburbs.

However about 25% of renter households that have children are now on the hook for back rent. Women and people of color are disproportionately more likely to owe back rent while black and Latino Californians are twice as likely to face rent insecurity than white Californians, according to the U.S. Census. 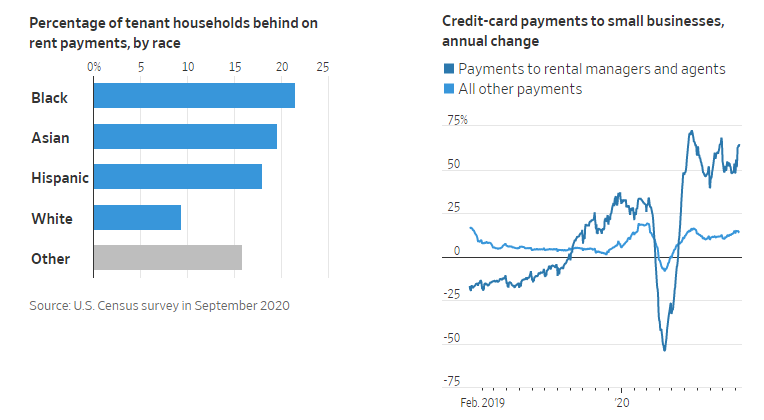 The debt could be enough to stifle a recovery coming out of the pandemic, the WSJ notes. Mark Zandi, Moody’s chief economist, said: “These households will have to make some pretty massive financial choices and pull back on other spending to pay their rent. That’s a hit to the economy.”

During the beginning of the pandemic, many households made a shift to credit cards to try and stay afloat. The Philadelphia Federal Reserve noted that “credit payments to small and medium-size businesses connected to rental real estate increased by more than 70% in the spring”. Those numbers remain elevated, near 50% higher than 2019, still.

Kate Bulger, a financial counselor specializing in housing debt at the Money Management International counseling firm, said: “Even if now they are able to make their rent payment, that huge inflation to their credit-card debt has become a new threat to their budget and their ability to cover all their expenses.”

She says the number of clients she has worked with who have put rent on credit cards “has exploded”.

Here Comes The Next Crisis: Up To 30% Of All Mortgages Will Default In “Biggest Wave Of Delinquencies In History”